Ever experienced an unexplained excruciating pain in the joints, ankles, or knees that lasted for some time and then subsided? Or, maybe when you bent your fingers to hold some object, you experienced a burning pain in your fingers so painful that you were unable to straighten them for some time. Or, for some of us who do yoga regularly, we may have experienced pain, burning, numbness, or tingling in the buttock, hip, low back, knees, etc. Notice how this pain subsides when you are advised by your physician to take non-steroidal anti-inflammatory drugs like ibuprofen, or for some of us who have been living with this chronic agonizing pain, relief comes from those powerful anti-inflammatory steroid medications. All these symptoms indicate you may have inflammation.

So, what is inflammation, why does it occur, and what are the best, safe and natural options to curb this disorder? Let’s start by defining the term: From the Latin term inflammo (meaning setting alight or igniting), inflammation is part of the body’s immune/defense response, the body’s attempt at self-protection. The objective of inflammation is to remove damaged cells, harmful irritants, or toxic pathogens and begin the healing process.

When something harmful or irritating affects a part of our body, there is a biological response to try to remove it. This response takes the form of inflammation for the body to heal itself. While inflammation is not infection, an infection caused by bacteria, virus or fungus can trigger an inflammation process. Thus, you may appreciate the fact that inflammation in a true sense is beneficial when, for example, you develop a viral infection or if your back sustains a blow and the injured tissues need care and protection. The classical signs of acute inflammation are pain, heat, redness and fluid accumulation (swelling). Inflammation may also be associated with symptoms including: fever, chills, fatigue/loss of energy, muscle aches, headaches and loss of appetite.

Chain of Events That Occur During the Inflammation Process

Just as every country maintains an army, air force and naval units to defend itself from enemy forces, our body too has an excellent defense system (aka immune system) characterized by an arsenal of molecules. Acute inflammation is the initial response of the body to harmful stimuli and is characterized by the release of

All these constitute our defense/immune system that is akin to a country’s defense system, with several layers of defenses of increasing specificity that culminate in the removal of pathogens and promote healing of any damaged tissue. Thus, in a perfect world or perfect body, the inflammatory process occurs just as it should, releasing defense/pro-inflammatory molecules when needed, and then turning them off when the threat has been sufficiently addressed.

Negative Aspect of the Inflammation Process

Imagine if the defense forces take on their own country and its citizens! Similarly, chronic inflammation is characterized by a defense response that is aberrant, out of control and is not completely turned off or extinguished. Just like a slow-burning fire that does not ebb, in chronic inflammation the defense/pro-inflammatory molecules continue to be present in the body even when they are not needed. With the inflammation switch refusing to turn off, the body operates as if it is always under attack. Inflammation draws on our body’s energy and resources and having a constant, low-grade flow of powerful pro-inflammatory molecules can result in bodily damage over time. Furthermore, once this system goes out of control, it self-perpetuates and quickly spirals into disease in areas such as blood vessels (atherosclerosis); pancreatic tissue (diabetes); bones and joints (arthritis); digestive system (lactose and gluten intolerance); limbs, muscles and nerves (fibromyalgia); fat tissue (obesity); throat (thyroid issues)—just for starters. The body goes haywire in its own defense, with the immune system failing to distinguish between what is foreign and what is our own self. This makes the body vulnerable to attacks from its own defense team.

As an aging researcher, I have learned that aging is one of the biggest risk factors for chronic inflammation because as we age, our bodies are less able to disarm the inflammatory process. Couple the aging process with a genetic predisposition, hypertension, or even smoking and it fuels the flames. In addition, stress (both physical and mental), environment, poor foods (sugary, processed, or fast food), high blood-insulin levels (type-2 diabetes), hormonal imbalance (estrogen and menopause) and obesity (leptin, adiponectin and other dietary hormone imbalance) are just a few of the factors that promote chronic inflammation.

Non-steroidal anti-inflammatory drugs (NSAIDs), that include drugs like aspirin, ibuprofen, and naproxen, reduce the level of certain chemicals called prostaglandins that are involved in inflammation. Treatment with NSAIDs can lead to less swelling and less pain. However, extended use of NSAIDS can cause intestinal bleeding and serious damage to the stomach, liver and kidneys.

Commonly referred to as steroids, glucocorticoids work to calm an overactive immune system and to decrease the level of inflammation in the body. People with multiple sclerosis, rheumatoid arthritis, lupus and other chronic inflammatory diseases are frequently prescribed these steroids to calm the inflammatory response. The problem is that these come with their own baggage of side effects and extended use of steroids can trigger osteoporosis, glaucoma, weight gain, high blood pressure and a lowered resistance to infections.

Finally, a nutritious diet is the basis for good health. Vitamins D, E and C and folic acid have powerful anti-inflammatory actions, and foods high in omega threes and sixes, fruits, vegetables, fermented foods and unrefined carbohydrates may help to reduce the body’s inflammatory response.

Yoga as an Anti-Inflammatory Therapy

See Stress, Inflammation and Yoga Practice to read one of the original studies.

Research on Yoga and Inflammation

In a study that confirms nearly all of the above observations, researchers at Ohio State University in Columbus divided 50 women with an average age of 41 into two groups: new to yoga and experts. The researchers then subjected these women to a battery of stress-inducing tasks, including holding their feet in extremely cold water or solving difficult math problems without the aid of a paper and pencil.

Blood samples were taken several times before, during and after the stressful activities and measured for the levels of several pro-inflammatory molecules. The research team found that women who were new to yoga had higher levels of nearly all the pro-inflammatory molecules tested and a much greater inflammatory response to the stressful tasks than women who were experts, suggesting that yoga may help to tune down the stress responses. See Adiponectin, leptin and yoga practice.

Yoga’s beneficial effects on inflammation are not confined just to people with inflammatory conditions. It turns out that caregivers who exhibit high levels of stress-associated inflammation and who often don’t have the time or energy to bring on a little relief from the stress of taking care of a loved one will benefit from a yoga practice even if it is for a brief period daily as it lowers stress-associated inflammation. In a study published in the journal Psychoneuroendocrinology, researchers found that caregivers who participated in a yoga practice experienced a change in the response of 68 anti-inflammatory genes, leading to a global decrease in inflammation.

After writing this article in one sitting I am experiencing an unexplained burning pain in my fingers. So, guess what? It’s time for me to roll out the mat and do a few yoga stretches. What a cheap and effective therapy for combating inflammation!

Reprinted with permission from yogaforhealthyaging.blogspot.com 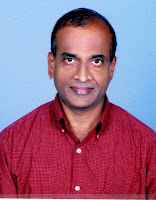 RAM RAO, Ph.D. With a doctorate in Neuroscience, Ram presently serves as a Research Associate Professor at the Buck Institute for Research on Aging. He focuses on various aspects of age associated neurodegenerative diseases with emphasis on Alzheimer’s disease. In addition, Ram completed the academic training at the California College of Ayurveda (CCA) and received his certification as Clinical Ayurvedic Specialist. He has been a faculty of the California College of Ayurveda and teaches in their Nevada City location. Ram is also a dedicated Hatha yoga practitioner and is a Registered Yoga Teacher from Yoga Alliance USA. In his spare time he offers consultations in YAMP techniques (Yoga, Ayurveda, Meditation & Pranayama). Ram has published several articles in major Yoga/Ayurveda magazines and has been a featured speaker in several national and international meetings and symposia. He is a member of the National Ayurvedic Medical Association (NAMA) and is on the Research Board of the Association of Ayurvedic Professionals of North America (AAPNA).

Yoga For Back Pain: Keys to Preventing and Healing Sacroiliac Instability
While millions of Americans suffer from pain in the low back and pelvis, many back and hip issues are actually the result of sacroiliac instability (SI), i.e. an imbalance in the sacroiliac joint, which often goes undiagnosed or is improperly treated. Alarmingly, yoga practitioners appear to... END_OF_DOCUMENT_TOKEN_TO_BE_REPLACED

Essentials of Safe Hip Opening
Hip openers are among the most satisfying and powerful yoga poses. They hold a tremendous potential for transformation; they can help us release deep-seated tension and trauma of the past, which many of us hold locked in the hip area. When practiced correctly, hip openers are a great way to soothe... END_OF_DOCUMENT_TOKEN_TO_BE_REPLACED

Yoga for the Pelvic Floor: Keys to Lifelong Health
Most people know the importance of core strengthening for health and long-term well-being, but the pelvic floor is an important group of core muscles, which tend to get ignored. “The torso is like a tote bag for your organs,” says Leslie Howard, a Bay area yoga teacher who conducts workshops... END_OF_DOCUMENT_TOKEN_TO_BE_REPLACED

It's official: A new study labels text neck and forward head posture a global epidemic and a worldwide public health problem. According to a new study, the prevalence of neck pain has increased dramatically... Read more

As a Yin Yoga practitioner and teacher trainer, I often hear some of the unfavorable things that people say about Yin Yoga. And honestly, I don’t blame them. I raised many of the same critiques myself when I... Read more

4 Benefits of Restorative Yoga (And Reasons to Practice It More Often!)

You don’t need me to convince you that exercise benefits you. Or how maintaining a base fitness level reduces your risk of injury, heart disease, and falls. I won’t tell you how regular exercise improves... Read more

Is Lower Back Pain Gender Specific?

My grandmother suffered from lower back pain for many years. She described it as sharp, debilitating pain on one side of her lower spine. The only remedy she could find was a heating pad that she regularly... Read more

Yoga for Healthy Brain Aging: The Newest Research on Brain Health and How Yoga Helps!