How Tight Hamstrings Can Affect Your Lumbar Spine in Yoga

Here's a quick update from the science literature on your hamstrings...

Biomechanically speaking, tight hamstrings can affect the position of your pelvis, especially in forward bends. This can, in turn, affect your lumbar spine because tight hamstrings produce a pull on the ischial tuberosities and tilt your pelvis back (as shown below in figure 2).

Tight Hamstrings in Your Yoga Practice

This interaction is known as spino-pelvic rhythm and is how the pelvis and lumbar spine move in relation to each other. Ideally, we want to have have a forward bend come predominantly from pelvic movement (pelvic dominance) rather than from the lumbar (lumbar dominance).

Scientific Literature on Tight Hamstrings, the Pelvis and the Lumbar Spine

To this end, I wanted to share a couple of articles from the recent science literature relating to how tight hamstrings affect your pelvis and lumbar spine. The first one discusses spino-pelvic rhythm in relation to the hamstrings. These researchers investigated forward bends (essentially Uttanasana) in subjects with tight hamstrings vs flexible hams.

What they found was...

And in a subsequent article they concluded that:

"Dynamic stretching could change the spino-pelvic to a pelvis-dominant motion, indicating that flexible hamstrings are important for preventing low back pain."

Yet another article reported that:

Figure 1 below shows what happens with flexible hamstrings... 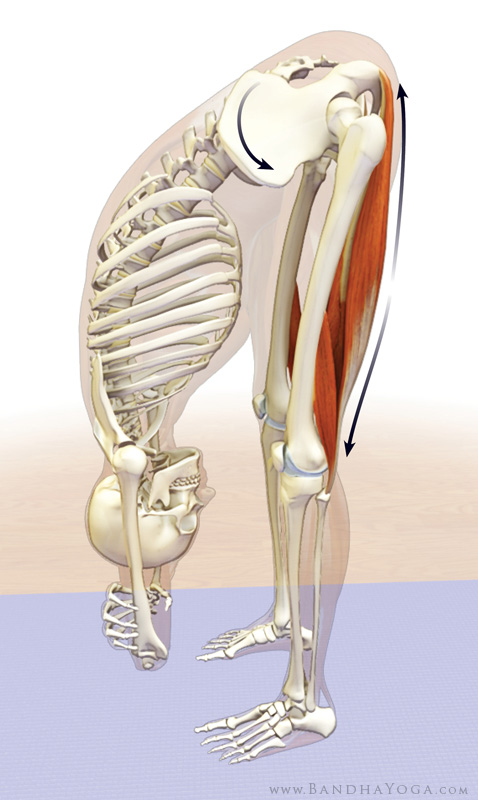 Figure 1: This illustrates how stretching the hamstrings releases the pull on the ischial tuberosities, permitting the pelvis to tilt forward into anteversion. This is known as femoral pelvic rhythm.

Figure 2 below illustrates what happens when your hamstrings are short or tight... 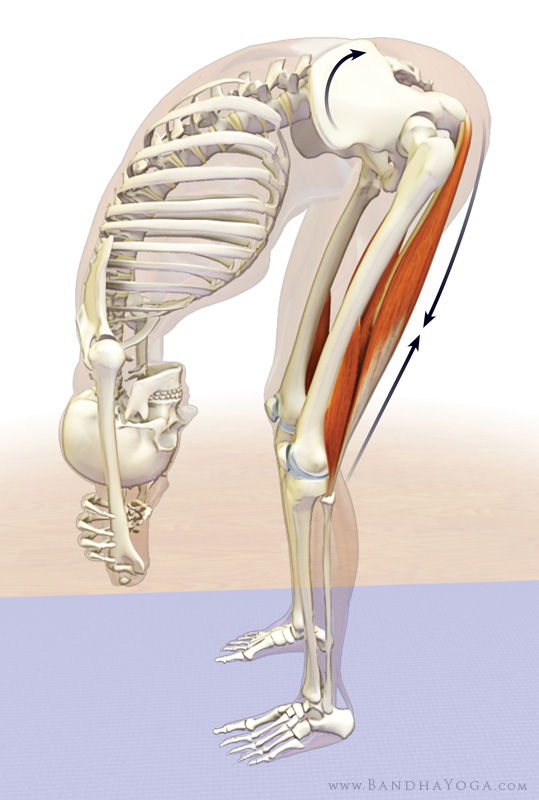 As the research demonstrates, stretching your hamstrings can help take the strain off of the ligaments and disks of the lumbar spine. Click here to read more on this subject. Click here to read about the role of the thoracolumbar fascia and the core muscles in protecting the lumbar. Click here for some cool information on gaining flexibility in your hamstrings as well as the myofascial connections between your hammies and your feet. (This shows how everything is connected...)

Figure 3  illustrates the pressure on the intervertebral discs in seated poses during lumbar flexion.

Anatomy of the Hamstrings

Here's a quick review of the anatomy of your hamstrings...

Reprinted with permission of thedailybandha.com

Author, Ray Long MD, FRCSC is a board certified orthopedic surgeon and the founder of Bandha Yoga. Ray graduated from The University of Michigan Medical School with post-graduate training at Cornell University, McGill University, The University of Montreal and Florida Orthopedic Institute. He has studied hatha yoga for over twenty years, training extensively with B.K.S. Iyengar and other leading yoga masters.

3d Graphic Designer / Illustrator Chris Macivor has been involved in the field of digital content creation for well over ten years. He is a graduate of Etobicoke School of the Arts, Sheridan College and Seneca College. Chris considers himself to be equally artististic and technical in nature. As such his work has spanned many genres from film and television to videogames and underwater imagery.

Yoga For Back Pain: Keys to Preventing and Healing Sacroiliac Instability
While millions of Americans suffer from pain in the low back and pelvis, many back and hip issues are actually the result of sacroiliac instability (SI), i.e. an imbalance in the sacroiliac joint, which often goes undiagnosed or is improperly treated. Alarmingly, yoga practitioners appear to... END_OF_DOCUMENT_TOKEN_TO_BE_REPLACED

Essentials of Safe Hip Opening
Hip openers are among the most satisfying and powerful yoga poses. They hold a tremendous potential for transformation; they can help us release deep-seated tension and trauma of the past, which many of us hold locked in the hip area. When practiced correctly, hip openers are a great way to soothe... END_OF_DOCUMENT_TOKEN_TO_BE_REPLACED

Yoga for the Pelvic Floor: Keys to Lifelong Health
Most people know the importance of core strengthening for health and long-term well-being, but the pelvic floor is an important group of core muscles, which tend to get ignored. “The torso is like a tote bag for your organs,” says Leslie Howard, a Bay area yoga teacher who conducts workshops... END_OF_DOCUMENT_TOKEN_TO_BE_REPLACED

It's official: A new study labels text neck and forward head posture a global epidemic and a worldwide public health problem. According to a new study, the prevalence of neck pain has increased dramatically... Read more

As a Yin Yoga practitioner and teacher trainer, I often hear some of the unfavorable things that people say about Yin Yoga. And honestly, I don’t blame them. I raised many of the same critiques myself when I... Read more

4 Benefits of Restorative Yoga (And Reasons to Practice It More Often!)

You don’t need me to convince you that exercise benefits you. Or how maintaining a base fitness level reduces your risk of injury, heart disease, and falls. I won’t tell you how regular exercise improves... Read more

Is Lower Back Pain Gender Specific?

My grandmother suffered from lower back pain for many years. She described it as sharp, debilitating pain on one side of her lower spine. The only remedy she could find was a heating pad that she regularly... Read more

Yoga for Healthy Brain Aging: The Newest Research on Brain Health and How Yoga Helps!