A Cool Tip For Deeper Breathing in Yoga

I studied yoga for an extended period at the Ramamani Iyengar Memorial Yoga Institute in Pune, India. The Iyengars are true world experts in yogic breathing. During my time there, I was exposed to great teachings of pranayama from BKS Iyengar, daughter Geeta, and son Prashant. These classes were amazing; their effect would last for days.

I continued to practice pranayama when I returned from India and gradually developed an understanding of the art. During this process, I used my medical training to analyze the breathing techniques. I found that I could use Western science to amplify the effects of pranayama.

Now, part of pranayama involves breathing deeply. The body has a group of muscles that it recruits when we need to take deeper breaths, say after running a sprint. Recruiting these muscles expands the chest to a greater extent than when using the diaphragm alone. The result is increased inspiratory volume and improved lung ventilation (on the alveolar level). It occurred to me that intentionally engaging these breathing muscles would augment the volume of my inhalations during pranayama and asana practice. So I developed a series of cues to activate the various accessory muscles and incorporated them into my practice. The effect was immediate and amazing. After my yoga practice was finished and throughout the day, my breathing felt effortless, leaving me energized.
How cool is that? 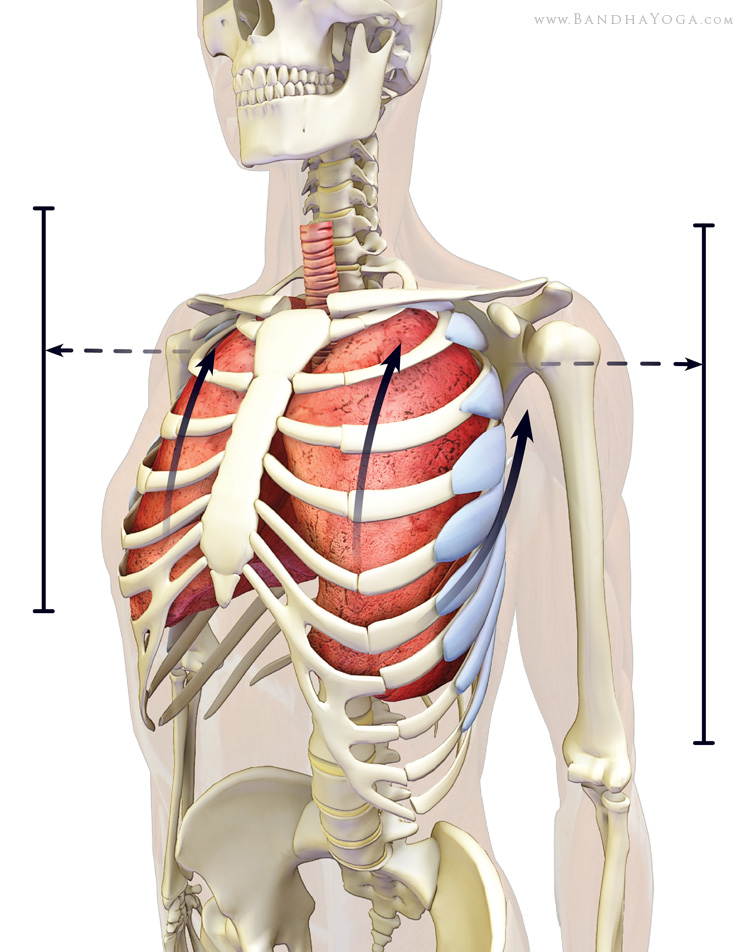 (Pictured left-Activating the serratus anterior to expand the lungs.)

So, here’s a cue for activating one of my fave accessory muscles—the serratus anterior (SA) and his buddies, the rhomboids. Pause for a second. Rest your hands on your thighs. Now, exhale naturally and then gently draw the shoulders back to bring the scapulae (shoulder blades) towards the spine. As you inhale, imagine pressing the sides of your shoulders and upper arms against an imaginary wall, like a doorframe. Feel how this expands your chest. Repeat this cue two more times before reading on.

The rhomboids (major and minor) originate from the spinous processes of cervical vertebrae six and seven and thoracic vertebrae one through four. They insert onto the medial border of the scapula and act to stabilize and draw the shoulder blades towards the midline. The serratus anterior originates from ribs one through nine and inserts on the inside of the entire medial border of the scapula. If the scapula is fixed (by engaging the rhomboids) then contracting the serratus anterior lifts and expands the ribcage. Just focus on this action for the moment. (When the shoulder blade is released, the serratus anterior rotates and moves the scapula laterally—but that’s another blog post.)

Ok, now repeat the steps from above—take a relaxed exhale, then draw the scapulae towards the midline and stabilize them there using the rhomboids (feel how this expands the chest forward). Then as you inhale, attempt to press the shoulders outwards against an imaginary wall. Take a relaxed exhalation and repeat two more times. 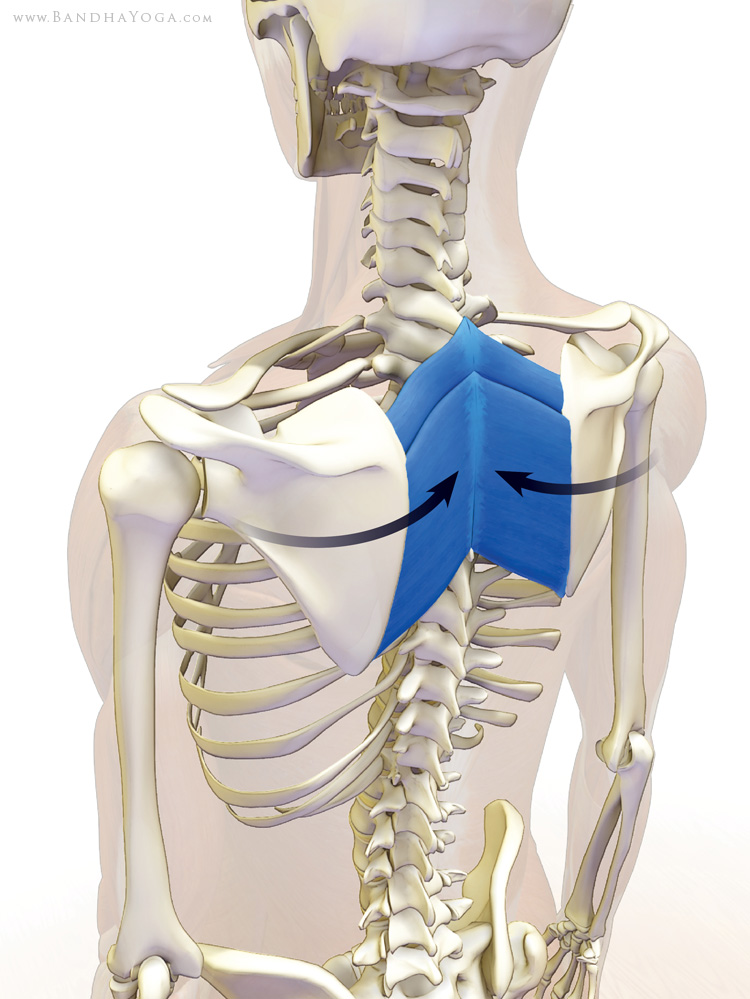 Do you notice how it’s easier to engage these muscles the second time around? That’s why I asked you to take a break, read about the anatomy, and then try it again. During the brief period you were reading, your unconscious brain formed new circuitry to activate these important muscles more efficiently.

Use this cue when you practice. For example, as you do Surya Namaskar, when you inhale to raise your arms overhead from Tadasana, imagine pressing the shoulders outwards against a wall. Try it in other poses as well, such as Urdva Mukha Svanasana (Upward-Facing Dog), Adho Mukha Svanasana (Downward-Facing Dog), and so on. This technique is especially effective for Vinyasa Flow—you will be floating!

Another article with breathing tips from YogaUOnline and Julie Wiebe PT:  Rest for Stress Relief, Healing, and Strength.

BREATHE: Yogic Tools for Happy, Healthy, and Fulfilling Relationships - a course from YogaUOnline and B Grace Bullock, Ph.D.

Reprinted with permission from thedailybandha.com

Author, Ray Long MD, FRCSC is a board-certified orthopedic surgeon and the founder of Bandha Yoga. Ray graduated from The University of Michigan Medical School with post-graduate training at Cornell University, McGill University, The University of Montreal and Florida Orthopedic Institute. He has studied hatha yoga for over twenty years, training extensively with B.K.S. Iyengar and other leading yoga masters.

3d Graphic Designer / Illustrator Chris Macivor has been involved in the field of digital content creation for well over ten years. He is a graduate of Etobicoke School of the Arts, Sheridan College and Seneca College. Chris considers himself to be equally artististic and technical in nature. As such his work has spanned many genres from film and television to videogames and underwater imagery.

Yoga For Back Pain: Keys to Preventing and Healing Sacroiliac Instability
While millions of Americans suffer from pain in the low back and pelvis, many back and hip issues are actually the result of sacroiliac instability (SI), i.e. an imbalance in the sacroiliac joint, which often goes undiagnosed or is improperly treated. Alarmingly, yoga practitioners appear to... END_OF_DOCUMENT_TOKEN_TO_BE_REPLACED

Essentials of Safe Hip Opening
Hip openers are among the most satisfying and powerful yoga poses. They hold a tremendous potential for transformation; they can help us release deep-seated tension and trauma of the past, which many of us hold locked in the hip area. When practiced correctly, hip openers are a great way to soothe... END_OF_DOCUMENT_TOKEN_TO_BE_REPLACED

Yoga for the Pelvic Floor: Keys to Lifelong Health
Most people know the importance of core strengthening for health and long-term well-being, but the pelvic floor is an important group of core muscles, which tend to get ignored. “The torso is like a tote bag for your organs,” says Leslie Howard, a Bay area yoga teacher who conducts workshops... END_OF_DOCUMENT_TOKEN_TO_BE_REPLACED

COVID-19 Pranayama: A Yogic Breathing Practice for the Pandemic

It all started with a short video that came across my YouTube feed about a month ago. And a brief one at that, just 3:42 long. But despite its brevity, its content caught my attention immediately: a breathing... Read more

Yoga to Open Your Shoulders

Cow Face Pose (Gomukhasana) is a staple in my morning yoga classes. Years ago, several of my students made up unflattering names for it—Cow Pie, Mad Cow, etc.—because it was so challenging for them. Now those... Read more